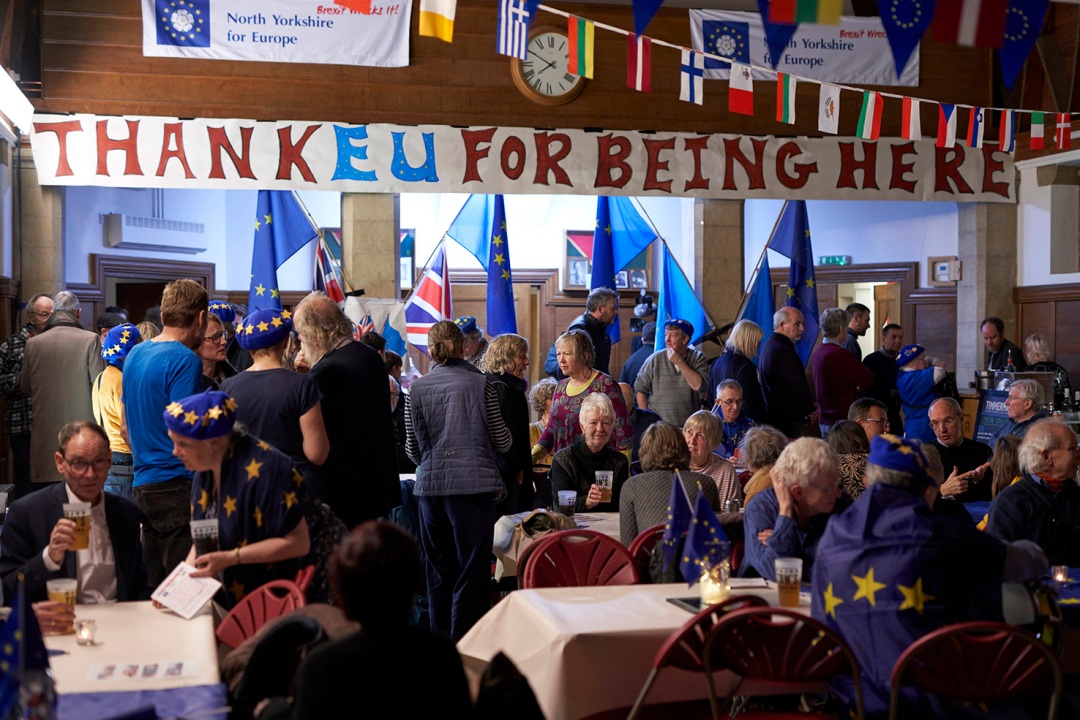 Thank EU for Being Here!

Our ‘Thank EU for Being Here’ party for EU27 citizens on January 31st was a roaring success.

On a sad day for our country our supporters refused to be despondent – and more than 130 of us packed into the historic St Wilfrid’s parish Hall in Harrogate – including around 40 EU27 nationals with citizens from Poland, Spain, Germany, Italy, France, Holland, Luxembourg and numerous other countries.

Entertainment was laid on by Arnold and the Raisers blues & folk band and by Arnold (again!) and the Reunion Chorus (the new name for the Yorkshire Remain Voice Choir). A vegan buffet was provided by the award-winning Mango Indian restaurant,  as well as stone-baked pizzas from a local Italian restaurant. There were speeches by European Movement vice-chair Richard Wilson,  Andy Dennis (an NHS nurse who volunteers with Medicins Sans Frontieres), and Richard Sadler, of North Yorkshire for Europe.

At 11pm , when the UK formally left the EU after 47 years, a minute’s silence was held followed by a mass rendition of Ode to Joy, the European anthem.

There were tears of sorrow but there was also optimism and very strong sense of kinship between so many like-minded people determined not to be downtrodden.

The event was filmed live via satellite link by a crew from ITN News at Ten. Watch News at Ten report from our party here [at 24′ 5″] Participants were also interviewed by Nick Robinson from BBC Radio 4’s Today Programme a film crew from BBC Look North and by BBC Radio York.

Our message: We want to thank our EU27 friends for the huge contribution they’ve made to our country – and we will do everything we can to hold the Government to account for the coming Brexit shambles!

A big welcome to all our new EU27 friends … and a huge thank you to our supporters whose generous donations made this event possible.

Read more about the party on Margaret’s blog

View all posts by samroberts22